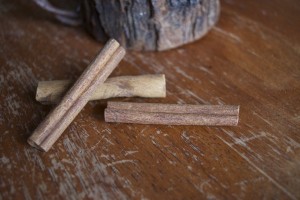 My hope for my children’s education is that it would be rich and relevant. Engaging their senses with spices is nothing short of richness in a bottle! There’s curry, cumin, cayenne pepper, chili powder, and last, but not least–cinnamon! And how relevant it is to help them recognize the flavors that enhance culinary experiences!

When possible, provide kids with various forms of cinnamon- powdered and as sticks.

STEP 1: After watching a short youtube video, The Cinnamon Story, on how cinnamon is grown and processed, we had a guessing game where I pulled out all the seasonings beginning with the letter C and, one at a time, let the girls smell them with their eyes closed until they discovered cinnamon. 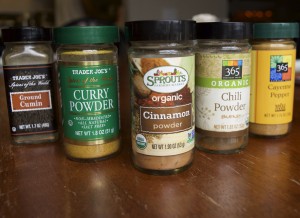 STEP 2 : Kids can draw a cinnamon tree on a piece of paper. 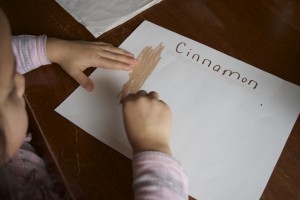 STEP 3: Pour a large drop of glue on paper and sprinkle powdered cinnamon on the glue. 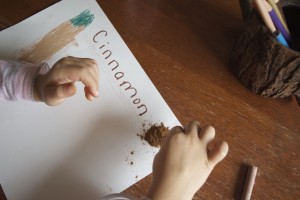 STEP 4: Draw foods they enjoy with cinnamon. (Allow glue to dry completely before storing in binder, otherwise you’ll have a sticky mess to clean up.) 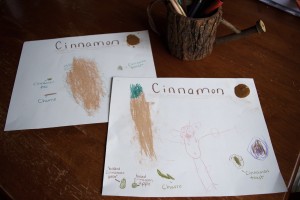 Engaging various senses in the learning process will enhance brain function. Here’s more on that.

Hi there! I’m glad you’ve stopped by Let’s Learn, Kids. The more you look around, the more you’re bound to see how colorful, flavorful, and essentially limitless learning can be! It’s an exhilarating topic that starts from birth and never ends. Please take a look around at all the resources designed to help you guide your child in purposeful learning. Beautiful, delicious, creative, inspiring—exactly what learning should be!